The Poles have had a particularly hard time of it the past couple of centuries. They have suffered much at the hands of foreigners. But in reading about their brave underground efforts to educate themselves and resist the efforts of their occupiers to rob them of their identity, I’ve come to admire them for their fighting spirit.

The flying universities were underground educational programmes begun by Polish scholars in the late 1800s to create greater educational opportunities and to resist the suppression of their culture. Meetings were small and were held in private homes and apartments. They were called “flying” universities because the meetings had to constantly be moved from one location to another in order to avoid detection by the authorities. The Polish term can also be translated as “floating universities”. 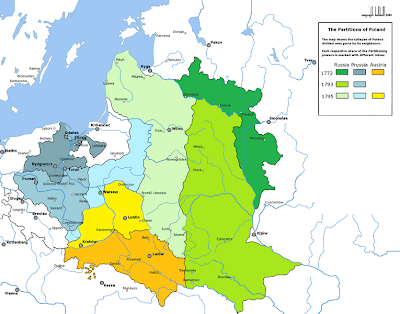 In the second half of the C18th the Polish-Lithuanian Commonwealth was partitioned among its more powerful neighbours. The bulk of the territory – the eastern half – was taken over by the Russians. The Prussians controlled the portion to the northwest and the Austro-Hungarians took control of the southwest portion. It became increasingly difficult for Poles to receive a higher education. Educational institutions were germanised or russified according to the area; the language and culture of the Poles was suppressed, as were studies in Roman Catholicism.

The first flying university was begun in Warsaw in 1882/3 by women. The 1870s had seen an increase in the educational opportunities available to women. But women were still not allowed to enter into universities in the Prussian and Russian parts of Poland and so they began to organise their own courses. One of the most famous students of the flying university was Marie Sklodowska, who later became Marie Curie (to the right). Curie was the first person to receive two Nobel Prizes, which she was awarded for her work in physics and chemistry.

Men only joined the flying university from 1890. In 1890, the number of registered students was 1,000. Programmes involved humanities, natural and social sciences, mathematics and pedagogy. There were many highly renowned academics serving as lecturers and the standard of education was very high.

The flying university was, of course, an illegal venture. Not many primary sources therefore exist as most documents were destroyed or not even created in order to avoid detection by the authorities. Students’ fees did, however, make it possible to establish a secret library.

The university lasted until 1905. In 1905 greater liberty was afforded to Poland and the flying university became an official association of academic courses. In 1920 it became the Free Polish University.

Under Nazi occupation, however, which began in 1939, Poland’s universities were closed and Poles were kept from receiving any form of higher education. The Germans wanted the Polish people to be a subordinate, servant race, trained only in manual, certain technical and menial occupations. Polish efforts to provide higher education opportunities were once again forced underground.

Underground high schools were established, and these schools provided students for the underground universities. Underground publishing houses were set up to provide teaching materials and textbooks. The subjects taught by the flying universities were extensive, including law, the humanities, economics, biology, mathematics and medicine. Pope John Paul II was trained at an underground seminary.

Well over 100,000 people received some form of underground secondary or tertiary education during the war, and vastly more than that received a primary level education. Nowhere else in Europe did underground teaching educate as many people as it did in Poland.

Ninety percent of the underground activities were located in Warsaw, but teaching, learning and research also took place in other major cities. Little happened in Kraków as most of the professors there had been sent to concentration camps. In fact, everyone involved in underground education was risking deportation or death. Between 1939 and 1940 approximately 9,000 teachers and over 600 professors were murdered by the Nazis.

At the controversial Yalta Conference held by the Allied victors in the Crimea at the end of the war, it was agreed that the Soviet Union should be given control of Poland. It soon became clear, however, that Stalin was not going to allow free elections to take place in Poland, as he had promised. Poland became a satellite state of the Soviet Union; a communist regime was officially established there in 1949.

The Communists ruled through a reign of terror, and little underground academic acitvity could take place. Official Polish universities were allowed to operate under the Communists, but the state-sanctioned syllabi were used as vehicles for communist propaganda. Members of the Communist Party were made directors of education so as to ensure that the various curricula were in keeping with the interests of the Soviet government.

Stalin died in 1953. By 1956 the political situation in Poland had eased up just enough to allow flying universities to begin operating again. Much focus was given to history and philosophy, subjects that had been heavily censored over the past decade.

I'd love to hear your thoughts - please share here...